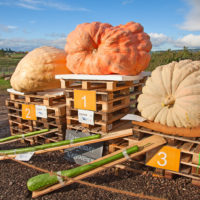 I don’t know if you are like me, but I didn’t do much during quarantine- except eat. A guy in Minnesota started growing pumpkins and he just won the World Championship Pumpkin contest in California. Travis Gienger, of Anoka, Minnesota, spent a lot of his free time in the pumpkin patch in his backyard, watering his plants up to 10 times a day and feeding and fertilizing them at least twice each day.  Travis’s pumpkin weighed in at a whopping 2,350 pounds. He won over 16,000 dollars for his efforts thats 7 dollars per pound! – Summer